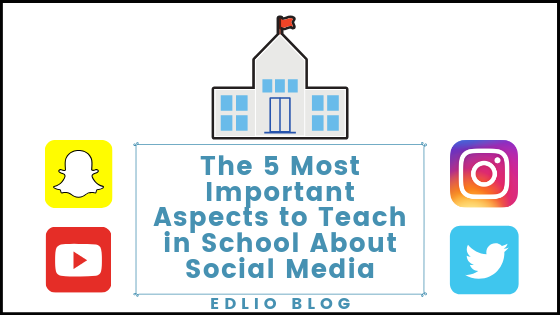 Social media has become an essential part of life for various age groups. It is not a secret that teenagers are very active on these platforms, in fact, according to Collegiate Times, “the average American teenager spends up to nine hours per day on social media”. Social media has many benefits, but far more risks, and it is important for teenagers to understand these risks beforehand to avoid as many complications as possible. As a teenager and high school student myself, I know we are constantly told to be very careful on social media and to think before we post. It can get annoying and repetitive, but the adults who continuously voice their concerns just want to make sure we truly understand how our life can be impacted because of being careless and posting something detrimental to our future online. Here are five key tips that should be taught in school for students to remember when engaging in social media.

1. Social Media for Schools: The Internet is Forever

Publishing something on social media is the equivalent of publishing something on any online platform. I’m sure everyone has heard it before, but it’s true! What you post on social media will remain on the internet forever, and it is important to note that, just because you delete it, it does not mean it is gone for good. Through technology, people have figured out how to view a user’s full history on the internet within multiple social media platforms. As well as this, people can take screenshots of these posts before they are deleted, so it’s likely that a copy still exists and can be republished. This can be avoided by reviewing anything you are hesitant to post and analyzing why it may be harmful. Students should remember to think before they post! You never know, that video of you lip syncing to your favorite song may come back to haunt you when you're applying for jobs one day.

This is a common misconception regarding social media that many teenagers have. Something that needs to be understood is that private accounts can still be seen. For example, a large number of people think their “spam accounts” will never be seen by anyone because they are private, so they post content that they only want their followers, likely close friends, to see. However, schools can see this content! Colleges often look into applicants’ social media history to see how they represent themselves in a positive manner on these platforms, and this includes spam accounts! Students should refrain from posting anything they would be uncomfortable with a teacher or important figure seeing. It happens too often that students will be accepted into top notch colleges and have their acceptance revoked because of posts they made through social media. All their hard work from high school is worthless because of one post.

3. There are Scam Accounts on Social Media

An unfortunate aspect of social media is that there are countless spam and fake accounts. They have all been seen before: “the first 100 followers get a free iPhone X!” and many other fake giveaways. Some people are so desperate for a following they will go to great lengths and have elaborate lies in order to gain followers. These types of strategies are cruel, and it is important to be able to know when accounts are using them for personal growth to avoid any danger. Students should look into an account and think about the credibility of it before engaging.

Most recently, there were hundreds of fake accounts made that promised to send Sudan a meal for every follower or like on a post on Instagram. Hundreds of thousands of people put these accounts on their story to help them grow, when in reality no meals or money were ever going to be sent to Sudan. Many people were shocked that these accounts were fake. It is important to look into factors of reliability, because had any of them done so, they would have seen that, according to CNN, “no reference was given to any recognized aid agency working in Sudan or how the meals would be distributed”, eliminating many factors of credibility.

4. The Effects of Social Media on Students in School

Teenagers by in large spend way too much time on social media, and some are even addicted. According to Collegiate Times, a study by UCLA showed that the nucleus accumbens, the brain’s reward center, “lights up” when people receive likes, and the addiction to social media is now “more prevalent than the addiction to cigarettes and alcohol”.

I personally have used social media for a very long period of time, and the data provided by these articles makes a lot of sense. Up until about a year ago, I would say I was addicted to social media. I used to keep my ringer on just to hear when I received notifications from my favorite social media apps. Once I began to notice the excessive use of social media by my peers around me, I realized that I too have the same problem. I began to cut my social media use immensely, and set time daily time limits that I would allow myself to be on the platforms for. I even created a club to try and help my fellow classmates decrease their usage. Decreasing my social media time has made me much less stressed. Immoderate  use of social media can cause a very negative impacts to people, and I am very fortunate I never had to face these.

It is super harmful for teens to engage in unhealthy hours of social media usage because of the damaging effects to one’s mental health that can be a result, such as depression, anxiety, and sleep deprivation. In a study published in Computers in Human Behavior, people engaging in more than seven social media platforms face “three times the risk of depression” than people who use two or less platforms. All of these are very negative effects from the exorbitant use of social media, and can be avoided through limits. It is important for students to be aware of the impact excessive use of social media can have on them in order to make educated decisions on how much they are engaging.

5. It Can Be a Great Networking Opportunity

Even with all of these aspects to remember, it is also important to note how great social media can be. There are countless stories of happy couples and best friends that met through social media, showing how life changing it can be. Multiple people actually make their income by being what is called an “influencer”, or someone with a large following across a variety of platforms. It can also be a fast form of communication. Messaging through social media is very easy, and due to the long periods of time people spend on these platforms, responses are typically very immediate.

Social media can also be educational and bring awareness. There are multiple informational accounts regarding various current issues so people can learn about them. These accounts also provide people with what they can do to help. Students should be aware that even with the dangerous aspects of social media, there are also many benefits.

Overall, social media can be great as long as it is used appropriately. By ensuring students know these aspects of social media, they can practice the safest and most beneficial engagement. Additionally, the dangers and risks social media presents will be prevented. It is important for students to know all the risks of social media usage, and that through engaging in safe practices, their use can be very worthwhile.

My name is Caroline Bradkin, and I am a seventeen year-old high school senior at Palisades Charter High School. I am the Director of Communications for Palisades DECA, a program that prepares emerging leaders and entrepreneurs in various aspects of business. I am also the founder of the Board Games Club, a club dedicated to limiting technology use and teaching younger kids how to play games. I also cheer for my high school varsity cheer team and have been since my sophomore year. When I am not at school, I enjoy volunteering at NKLA, a no-kill animal shelter in Los Angeles. I am joining Edlio this summer through The Intern Project (TIP) as a marketing intern. After high school, I plan on pursuing a career in marketing or communications.